The accidental death of a cop forces a teenage runaway into hiding. It doesn’t help that memories from a thousand years ago are making Jerome question his sanity as well as his safety.

When Geoff Stallings finds Jerome hiding in a park and eating from a dumpster, he makes him an offer that seems too good to be true. All Jerome has to do is keep his mouth shut about his new “sponsors” and he can be part of a special project that studies kids just like him.

Jerome joins Ondy, Sarah, and Alka at the school to learn more about his ancestral memories of Benjamin, a squire from medieval France. Jerome is quickly engrossed with his new friends and new life, but he is forcibly reminded that his place at the school and in the project have conditions that will need to be met, including betraying his new friends.

Jerome has to make a tough choice, jeopardizing every good thing he has built, including his new friends, his family, and maybe even his life.

It looks like the memory project has some fresh blood and the new owner, Aiden, the grandson of the previous sponsor, doesn’t mind getting some of it on his hands…

From the Editor:
This fast-paced sequel to the thrilling novel, Flashback, features Jerome, a troubled runaway who finds himself at the scene of a crime and flees into hiding. Jerome is beset by dreams that seem too real and skills he never knew he possessed. When a stranger offers to give him a new life and make his troubles disappear, Jerome can’t wait to join the program and begin again. But this new life comes with conditions and consequences he could never see coming and he finds himself caught between a Boudicca and a hard place.

If you enjoy Sci-Fi Romance, check out the first book in the RIBUS 7 series by Shae Mills: 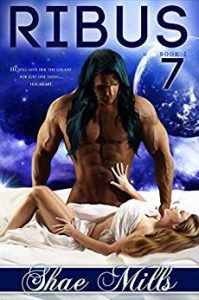